The Valley of the Hudson was originally constituted in 1956 as the Valley of White Plains. In 2004, the Valley changed its name to the Valley of Westchester. In 2007, it relocated to Wappingers Falls, NY and adopted the name “Valley of the Hudson”.
The Valley of White Plains first started with all four Scottish Rite bodies, however in 2004; it surrendered its Chapter of Rose Croix and Consistory, and maintained a Lodge of Perfection and Council Princes of Jerusalem.
The combined membership in these two Scottish Rite Valleys is approximately 300 Scottish Rite Masons.
The Committee proposed the creation of a unified Valley of the Hudson with the placement of each Body in areas with the greatest population of Freemasons.  The locations selected were Middletown in Orange County, Wappingers Falls in Dutchess County, Saugerties in Ulster County and Mt. Kisco in Westchester County.   The Committee proposed that the Middletown Lodge of Perfection remain in Middletown, NY, serving as the gate-keeper for all Masons in the region who are interested in becoming Master Travelers.  It recommended that the Council of Princes of Jerusalem be located in Mt. Kisco, NY, while the Chapter Rose Croix is located in Saugerties, NY.  The Consistory would as recommended to be located at Wappingers Falls, NY thereby providing a capstone experience for all Sublime Princes of the Royal Secret.
On May 8, 2012, the members of the Valley of Middletown voted affirmatively to approve the adoption of unified Bylaws followed by an affirmative vote by the Valley of the Hudson members on May 10, 2012.    The proposal was then reviewed and favorably voted upon by the Administrative Board of the New York State Council of Deliberation at its Annual Meeting in July 2012.  The proposal was then forwarded to the Supreme Council’s Jurisprudence Committee and Executive Board for review, receiving a final vote of approval on August 24, 2012.

On September 9th, 2012, the new and unified Valley of the Hudson was consecrated and its officer line was elected and installed.  The new Valley has adopted the streamlined structure for governance as provided by the recent changes in the Supreme Council Constitutions requiring fewer officers for elected positions.  On November 16-17, 2012, the Valley hosted its inaugural Reunion in Poughkeepsie, which featured invited degree teams and cast members from various Valleys including Boston, MA and Albany, NY.

The 4, 6, 7, 10, 13, 14 and 19 degrees were conferred over the course of the two-day event.  There were a total of 44 candidates from three Valleys with 29 alone from the new Valley of the Hudson. The class was dedicated to the Ill. Peter J. Samiec, 33° Active and Deputy for the State of New York and Ill. G. Michael Morris, 33°, Active assigned to the Valley.  Guest dignitaries included the Ill. Donald Moran 33°, Active and Deputy for the Commonwealth of Massachusetts and Ill. Robert Godbout 33°, Active for the Commonwealth of Massachusetts.

Culminating this event was the exemplification of the ‘new test’ 32° during a combined cast from members of the Valleys of Syracuse, Schenectady, Delaware, New York City and the Hudson in a true spirit of Unification!  With a long road ahead, the brothers of the Valley of the Hudson are very excited for their future and chuckle proudly when they are referred to as the
“Little Valley That Could.” 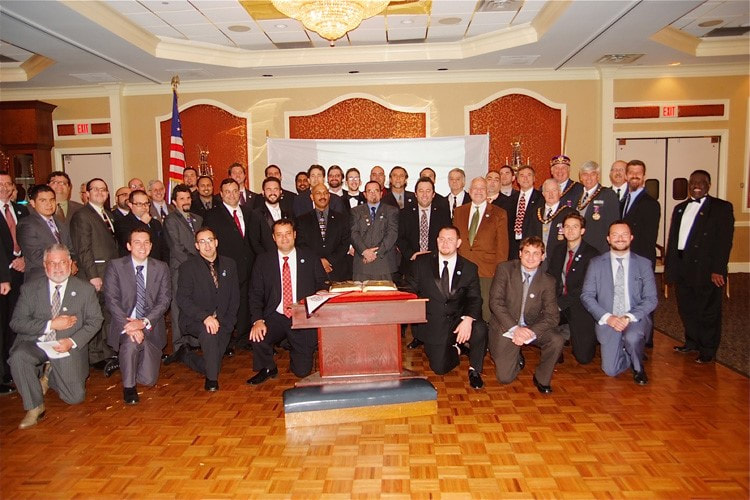 Meetings are rotated among each of the four bodies so that the members could enjoy the convenience of recruiting new members, holding family, fundraiser and other Scottish Rite events. These are important ingredients for success in meeting the needs of the Masonic community and improving access to all interested in the Scottish Rite vision.
Successful partnerships in this unification effort is building a membership base representing a wide range of members.
These shared experiences can often result in unique opportunities at the body and Valley level to foster collaboration and the enrich fraternal experience.
© 2019 Valley of Hudson, NY, AASR, NMJ, USA. All Rights Reserved.